While cleaning out my closet in preparation to move, I came across an old poem a friend of mine wrote. Before sharing the poem, I will provide some context. I first met my friend, Joe Kronen, when I started Judo at The University of Connecticut in 1988. We essentially started and shared our judo journey together. We both trained for several years at UCONN judo and both earned our black belts. Joe then moved to Japan for work. A year later I too moved to Japan to teach English and continue studying judo. It was about this time we started to notice differences in our respective approach to life in Japan, judo and life in general. Joe was not a natural at judo. Learning new technique was difficult for him and required a lot of practice. Joe made up for this with hard work, determination and a no-quit attitude.

Though no elite athlete, judo came easier for me. Consequently, when Joe was doggedly drilling technique. I was playing around on the mat and doing rondori (sparring). Our approach to learning the language took a similar route. Again, this was not easy for Joe. He took classes and studied hard to learn proper grammar and structure. I on the other hand enjoy socializing and with a few Japanese words under my belt, began talking with everyone. I’m sure my grammar and structure were horrible, but I do believe most understood the basics of what I was communicating.

Our differences worked well together. When in a group setting, Joe would quietly tell me how to say one thing or another and I would be the front man talking to the group. But this was not the case on the mat. The mat was our arena to determine which approach to life was superior.

Friends they have become, but this was not to chat.

The surrounding people could not see what was about to start.

For this was not Chinese checkers, but rather – a martial art.

Mr Black, a Judo veteran is not stranger to the dance.

To Japan and back, he is known for his patience and endurance.

Mr White, also a long time Judo man, but opposing in style, he is quick to achieve,

His determination and counters are readily conceived.

“Let’s keep this light”” was the theme, so keep alert,

Age and battles have left each veteran with a right knee hurt.

Bow – and then they battled for grips to start the rondori,

Adversarial rules returned as each fighter reached for guts and glory.

Mr White started quickly and his throws opened the door,

His opponent was left stunned and lying flat on the floor.

For Mr White at one time mat work was a weakness,

But now he moved from standing to osaekomi like a thoroughbred at the Preakness.

Slow to react – it looked lie Mr Black had no mental concentration.

Mr White in confidence jabbed – “use that osotogari the best that you can”.

Mr Black hooked the leg and attacked, but was countered with a big BAAAAM.

Time was important – as the minutes ticked by,

“The hold is legal” came from the judge as a ruling,

Another victory for Mr White, but his engines were cooling.

Mr Black gained focus and moved from victim to armbar specialist in surprise,

After Mr White got the elbow pain of a udegarame – his fight began to demise.

“Where did you learn that?” Mr White did demand,

Mr Black simply replied “Where else – but from the Judo Gentleman.”

The seesaw did tip, and with Mr Black’s osotogari it was time to score,

Once, twice, three times or more, this technique did send Mr White flying to the floor.

After 20 minutes of fighting – there was no room to laugh,

For each adversary had split the victories half-and-half.

Feeling good he proclaimed “Today – I am alive”.

Joe and I remain friends. We keep in touch and visit when life allows. Invariably we find a mat, a rug or patch of grass to roll. Throughout the years we’ve traded wins and losses. Joe recently drove through Virginia on his way to meet his family in Florida. He stopped in to visit Centreville BJJ. Once again we battled: this particular time I came out on top. I say this with humility because I know my old friend Joe…and he will be back with a vengeance. 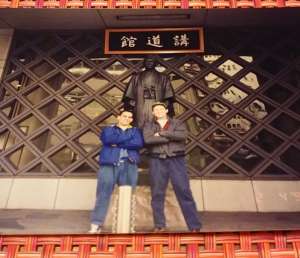 Joe Kronen and Scott Salb: The Kodokan in Japan circa 1995 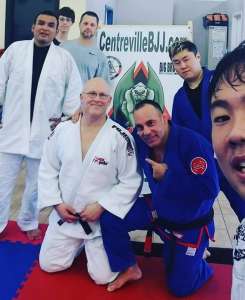